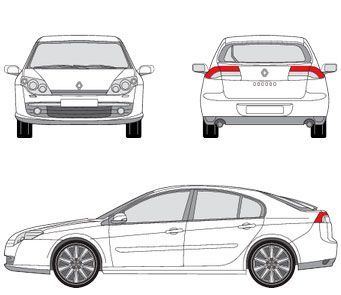 What styles of car bodies exist?

The body of a car is the space where the passengers and the cargo are placed. In promotional pamphlets, you usually read words like Sedan, Minivan, SUV, Hatchback, etc. All of them are related to the car body style. In this article, we will tell you how to classify different car bodies and their particular features.

Types according to body configuration

According to their configuration, car bodies can be distinguished from each other because of their designs, that is to say, their geometrical structure is well-defined. In these images, you can see their shapes highlighted in color. The type will change according to the number of boxes their design has:

Types according to their style

Besides their body configuration, there is a classification according to the style of the car. In this list, the number of doors and the way the trunk is opened, among other characteristics, will be included. In this group, the different car styles will be grouped esthetically.

Types according to the rear section

1. Notchback: it is a synonym for three-box cars. The front section, middle section, and rear section are well-defined.

2. Hatchback: they are two-box cars. The rear truck lid includes the rear window glass, and its shape falls abruptly, which makes the rear part of the car have a pronounced shape. Through its truck, you can enter the cabin. Unlike station wagons, hatchback cars have a shorter overhang rear and a truck door that is less vertical.

3. Liftback: they are a variation of hatchback cars, but their truck door is sloping. They usually have four side doors, so they are considered equivalent to “five door” cars.

4. Fastback or Sportback: there is a single slope from the roof to the tail. They are aerodynamic cars.

Have you found an error in this guide? Let us know
Was this information useful?
Thank you!
Read more about Kia
and car body styles

What should you check on your Cadenza before a road trip?
How to keep your Cadenza safe during extended periods without use