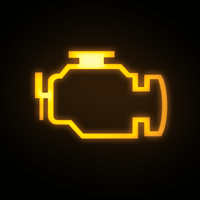 What does the check engine light of your Ridgeline mean?

In a few words:
It’s a warning light that alerts the driver about any type of engine problems. In some vehicles, the light comes in two colors: yellow to indicate minor problems and red to indicate serious problems.

The check engine light is part of every vehicle that has an electronic engine management system, either an integral one or only for fuel ignition. Its function is to alert the driver about any type of engine problems.

While driving, the computer of your Ridgeline (ECU o PCM) monitors air/fuel supply and exhaust gases in order to verify that the engine is working properly. If any problem is detected, the check engine Light of your dashboard will turn on.

Depending on the type of failure, the light may either blink or remain constantly lit. If the problem is serious, your Ridgeline will be in a “emergency” state that will prevent you from accelerating the engine above certain speed limit, forcing you to drive at low speed in order to avoid further damages.

The check engine light can alert you about some failures but not all of them. It will depend on how complex the electronic control unit of your Ridgeline is.

To properly diagnose the failure of your Ridgeline, it is important to have a suitable scanner that is compatible with the brand and model of your car. The scanner will show the engine fault code that the computer has detected, which is related to a certain problem that is affecting the engine.

The most common check engine light causes of your Ridgeline and how to detect them.

The check engine light can behave in different ways. Here we show you the most common light signals so you can know what is happening to your Ridgeline:

Keep in mind that if you have a top-quality scanner, you will be able to verify all the car sensors, avoiding blind maintenance which is a pointless waste of money. Another recommendation is to check the owner's manual, if you want to know more about the fault codes that the scanner will detect.

Have you found an error in this guide? Let us know
Was this information useful?
Thank you!
Read more about Honda
and The check engine light

What is the immobilizer on a Ridgeline? Why does it fail?

My engine light came on in my 07 honda ridge so I had it hooked up
Honda Ridgeline 2007
Check engine light
I had my ridge line hooked up to a dionostics machine and it said my coolent system temp high and senors or codes 1 and 2. What does this mean is wrong?